Recently I did some design consulting for friends as they renovated a wonderful historic building for use as a brew-pub. With my current full-time commitment to teaching I rarely have an opportunity to engage in many design projects. Luckily, my friends are the owners of  the building and the brewing operation and they are talented, creative people, who did not need much help from me, so,  I was able to offer suggestions and provide some space planning for the projects, which was a great fit for my crazy schedule.

One day the owners mentioned they needed a quick rendering for some stakeholders and I was very busy with some other work. I tried to render a SketchUp model I’d done for the project but it was slow going due to the vintage nature of the materials and I was running out of time. I decided to try taking a photograph and “Photoshopping it” creating a collage and placing a bar in the proposed location. I sort of drew the bar by taking a sample of the existing wall wainscoting using the Skew Tool in Photoshop  (we planned to re-used the wainscoting for the bar face so it was a reasonable choice).  I also used the same method to add a lighter wood top.

I decided to use this method to help decide if we should retain the finish of a wall that had many layers of paint and had developed a pretty great patina. The images below show the photograph I used and two versions of the quick rendering. At this time we were also reviewing whether to place chalkboard on the wall as shown in the images. 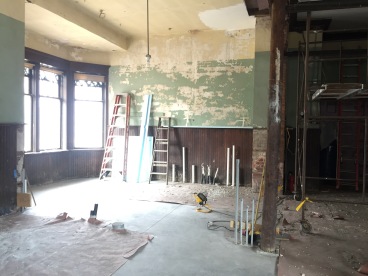 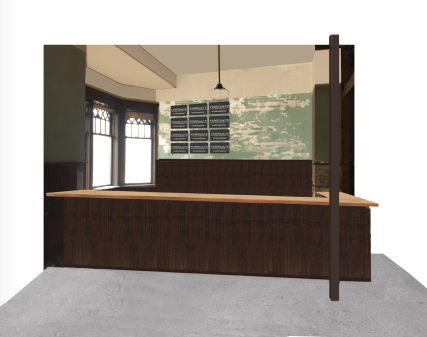 I had been fooling around in SketchUp for two hours and was worried that by taking the time to aim for a realistic rendering done in SketchUp with a rendering plug-in, I would run out of time. In desperation, I just starting playing around with Photoshop and in 20 minutes (maybe less)  I had several options to show the owner and the quick nature of it worked just fine given where we were with the project.

Another rewarding thing occured recently: I was named to the Design Intelligence list of admired educators.